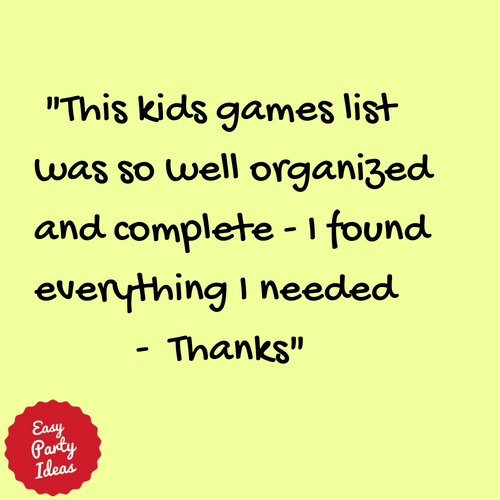 You’ll be wanting to include great kids party games when planning your party!

On the following pages you’ll find a full selection of free kids games to play at parties – more than you’ll ever need for your kids birthday party!

Skip to hints for planning party games for kids 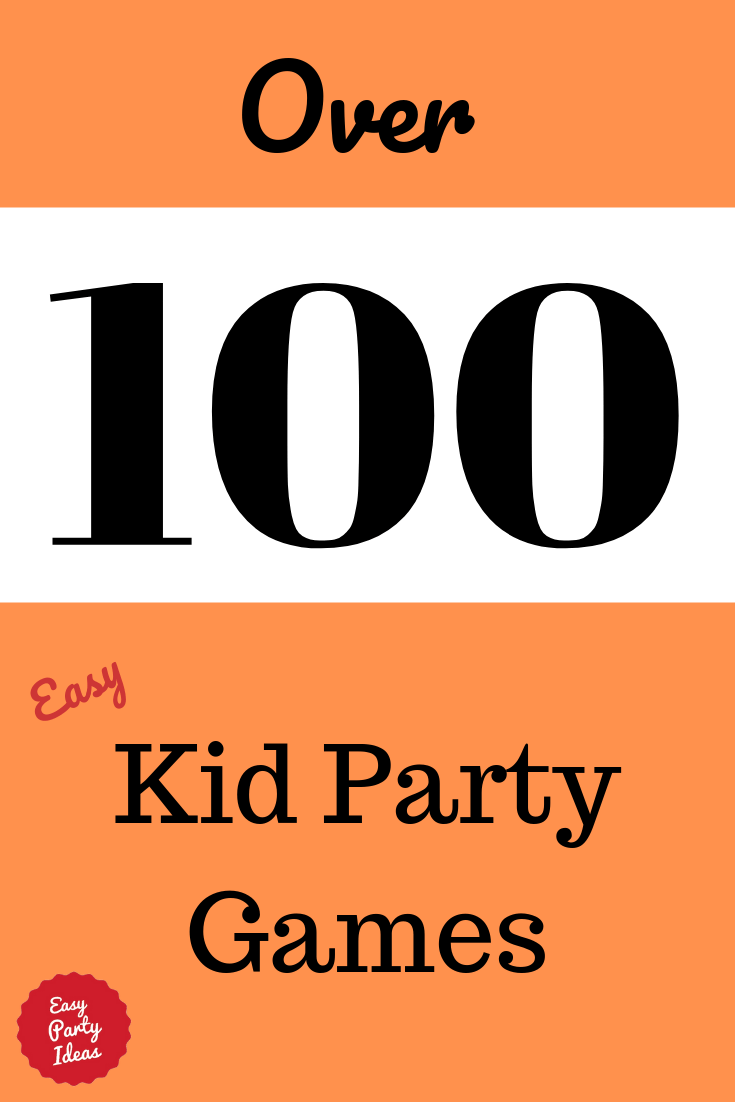 All of these games involve throwing or catching something - better keep these outdoors! Classic childrens birthday party games include:

As the name implies, all of these games are played with the players gathering in a circle. These games can be played inside or outside! (I love those!) Easy party games include: 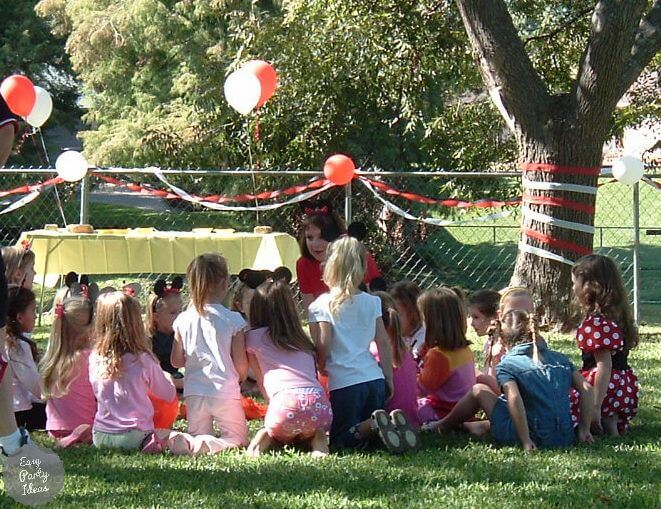 It's all about the thrill of the hunt!

Go to Page about Hunts

All the great, classic leader and playground games are here! How many of these do you remember? Games to play a party include:

The fun party games on this list involve music. Pick music that relates to your theme to really make it fun! These games can be played outside and possible inside. Kids games include:

If your party involves a swimming pool, you'll want to check out our list of pool kids party games! Pool games include:


Games you can print and play from PrintGamesNow.com

Divide your guests into teams and away you go! Races and relay games are lots of fun because they are kids party games that involve everyone. These party games for kids include: 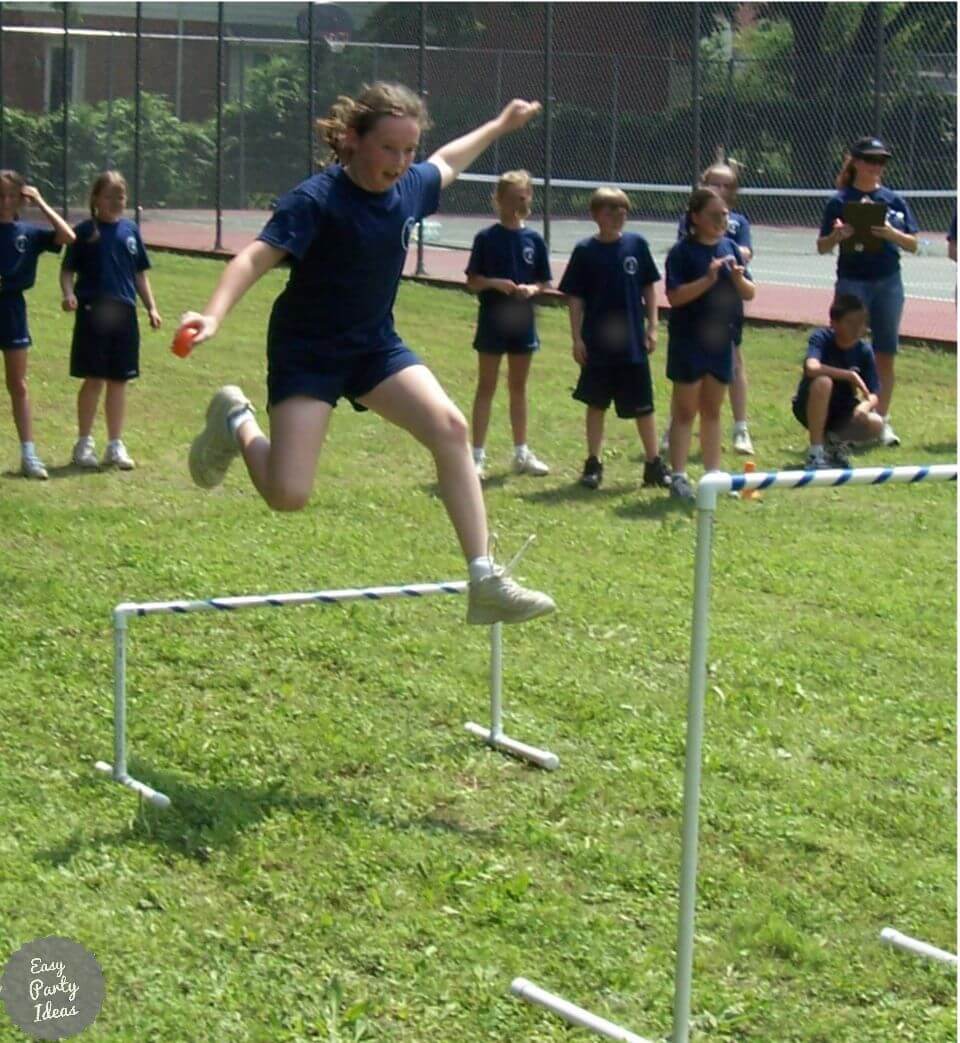 Tag, you're it! The kids party games on this list all involve someone being "It". Tag games are best played outside, unless you have a large indoor party space. Games include: 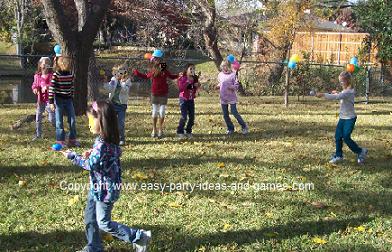 All those great target type games for your party are listed here. Fun kids party games include:

Go to the Target Games Page

Keep cool with our water games list! With or without a pool, you'll never look at a hot day the same way again! Group games include:

Many more on the Water Games Page

This list of kids party games is tailored specifically for any party for a very young child, usually three years of age or younger (although they can be played with older kids as well!). These preschool kids party games include:


Games on other sites

Free Toddler Games
Free Toddler Games has a huge list of activities that are lots fun and can make some of the most memorable moments for everyone! And you don't need to go out and spend lot of money on expensive stuff, you can use things you probably have on hand.

We've also organized some easy party games by theme, just to make it a little easier for your planning...

Have A Great Party Idea or Game?

Share your own great ideas from parties you've planned or attended!

For this game,you'll need at least five people,a large open space, and a blindfold. It's a perfect game for kids aged 6-9. To play, choose one player to …

What Other Site Visitors Have Said

Telephone Game
We love to play the Telephone Game as one of our favorite child party games. Everybody sits on the ground in a circle. The first person whispers a secret …

Dance Off Not rated yet
Each one of the kids or anyone do a dance to ONE song and everybody votes who did the best.

Mother May I Not rated yet
Well, my friend and I were bored. I wanted to play house and she wanted to play red light green light. So her dad got tired of listening to us argue so …

Hello Mr. Judge Not rated yet
You pick the host first and ask them to turn around and close their eyes. No peeking! Then go in a circle and shuffle yourself. Start to the left and one …

Kid Games Not rated yet
Kid games that my son who is 11 and his friends love, and which we often do as an Ice breaker is toilet roll mummies... teams of two players.Each team …

Kid Party Games Not rated yet
My son and his friends when they were 11 had some favorite kid party games. They just loved to play a pictionary game with playdough...You need two …

Circle Game Not rated yet
Everyone sits in a circle and each person has their own sign (a body movement - maybe touch your nose, rub your elbow, ets). Everyone knows each others …

Name That Song Not rated yet
A great game for a sleepover with at least 6 girls is Name that Song. First, Divide into two teams.(Blue, Red, Etc.)Pick one person on each team to be …

Colorful Letters Not rated yet
Colorful Letters: First, get wooden letters that are the first letter of every guests first name. Then, take squeezable paint and decorate them to hang …

Snake Not rated yet
Snake is a fun game for a sports party or tennis party. Give everyone a tennis racket and line them up. Then give one person at the end a ball. Have everyone …

Water Guns vs Grenades Not rated yet
This is a water game to be played with youth groups or at a party. Prefill several hundred water grenades or balloons; whatever. Split your group into …

Water Balloon Fight Not rated yet
For a fun water balloon fight, well, you divide as many people you have in your group into 2 groups. Then you give both teams equal number of water filled …

The Layered Surprise Party Game Not rated yet
This game can be played for children of all ages.For our game, we wrapped a surprise in layers and layers of paper. You can put into each layer a prize …

Knock Kneed Not rated yet
In this "knock kneed" game, set up relay teams and have them race with a balloon between their legs, sqeeze and pop the balloon and then run back.