When you have enough players, a water relay race is lots of fun. They are especially fun if it is a hot day!

Here is a great list for you to choose from. Enjoy! 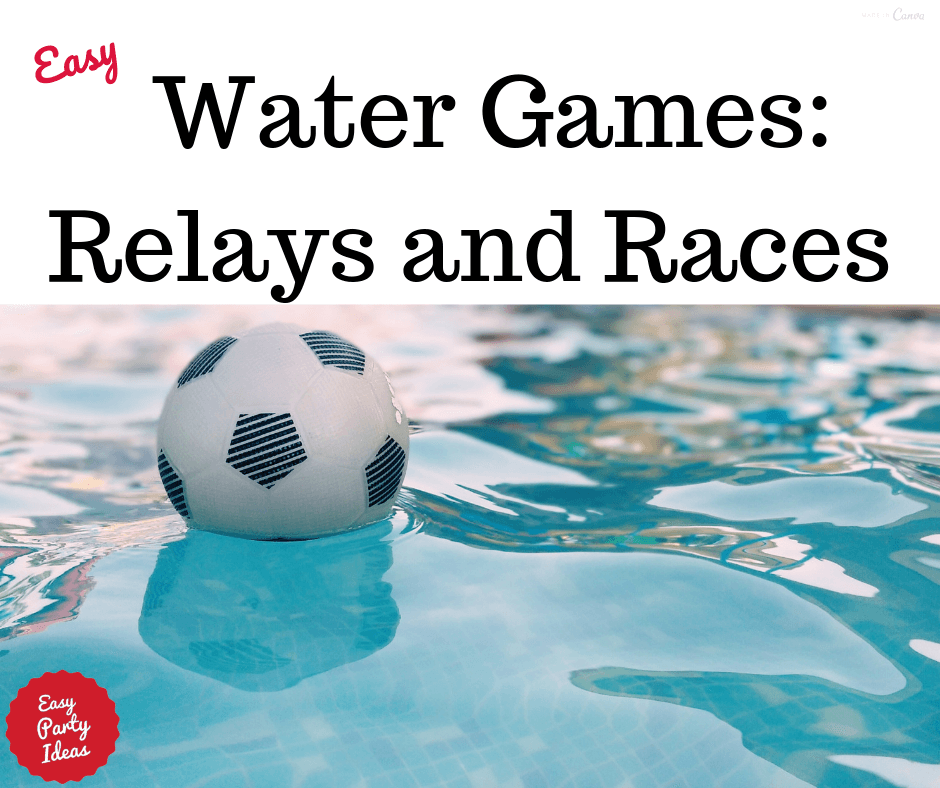 Air Raid Relay Race - You’ll need a bucket of water and several sponges and an obstacle course. If possible, make the obstacles large enough that a player can hide behind them. Assign two people to be the “bombers”, and give them each a bucket of water and a supply of sponges. Divide remaining players into teams. The two teams do the obstacle course as a relay, with the “bombers” trying to hit them. The “bombers” are only allowed to try to hit their targets until the runners hit the return line, and then those players are “safe”.

Keep the Bucket Full Water Relay Race - You’ll need four small buckets filled to the top with water and an obstacle course. Put four buckets full of water at the starting line. Divide players into two teams. On “Go," the first racer on each team picks up two buckets and runs the obstacle course, trying not to spill the water. Continue with each player on the two teams until everyone gets a turn. The team with the most water left in their buckets wins.

Leaking Cup Water Relay Race - You’ll need a bucket of water, two cups with holes in it, two empty buckets and an obstacle course. Divide players into two teams. The first player on each team fills his cup with water, places the leaking cup over his head and runs around the obstacle course. When the player gets back to the starting line, he pours whatever water is left in his cup into the empty bucket and hands the empty cup to the next player. The team that fills their empty bucket to a pre-determined point first wins.

Sponge Water Relay Race – You’ll need two buckets full of water and two sponges. Divide the players into two teams. On “Go”, one player from each team soaks up as much water as possible into sponge and carries it to another bucket, squeezes out the water and runs back to hand the sponge to the next player. The team that fills their empty bucket to a pre-determined point first wins.

Up and Down Sponge Water Relay Race - You’ll need two large sponges, two buckets of water, and two empty buckets. Divide the players into teams that consist of two lines and have the lines facing one direction. At the head of each line put a bucket of water, and at the back of each line place an empty bucket. Hand the first person in each team an object. On “Go”, they must hand the sponge to the next person in line, but only by passing it over their head. The second person in line must pass the item on by passing it under their legs. Each time the object reaches the last person, have them squeeze as much water out of the sponge as possible into the empty bucket, then run to the front of the line and be the new head of the line. They’ll fill the sponge with water and begin passing it back again, over heads and between legs. The race is over when everyone one of the buckets reaches its fill line. You can also do this race by having the two teams stand side by side and pass the sponge normally from one player to the next.

Water Balloon Pop Relay – You’ll need a filled water balloon for each player and two outdoor chairs. Divide the players into lines of two teams and give each plsyer a balloon. Have a few extra balloons on hand in case any pop before the game begins. On “Go”, one member of each team will race to the chair, try to pop their balloon by sitting on it, and when successful run back to the team. This is a relay, so the next person on the team would then be able to go until everyone has had a turn. If you don’t want to use chairs, players can pop balloons by sitting on them on the ground.

Water Balloon Race – You’ll need one filled water balloon for every two players (make a few extra in case any pop before the game starts). Have the teams race from one point to another, while carrying a balloon between them. The catch? They can’t use their hands to carry the balloon!

Water Relay Race - You’ll need four buckets and two shallow bowls (one for each team). Divide the players into two teams. For each team, place a bucket full of water at the starting line, and an empty bucket a distance away. On “Go”, have the first player from each team fill their bowl with water, run to their other bucket to pour in the water, and then run back to their team for the next person to have their turn. Have the relay continue until the bucket is full (or until the water level reaches a certain pre-determined height.)

Wet T-shirt Relay
By: Evelina P., Winnipeg, Manitoba, Canada
The Wet T-shirt Relay:  One student at a time will run to a bucket filled with water that has a wet shirt in in it.  The student must put on the shirt and run back to a bucket with a line drawn in it indicating the level of water that has to fill it. They need to squeeze as much water out of the shirt that they can then run to the next person in line.  The next person runs to the original bucket, dips the t-shirt into the original bucket and repeats the original process. (Ten kids middle years and early years)

Enlist these ideas for an easy party