These fun water balloon games would be great at a beach party or pool party (make sure you clean up the balloons though!).

When playing water balloon games, remember that water balloons are lots of fun but they pack a powerful punch! For younger children, use sponges instead when throwing at people.

Important: Make sure that all pieces of broken water balloons are picked up after the games! They are a choking hazard if children are present. 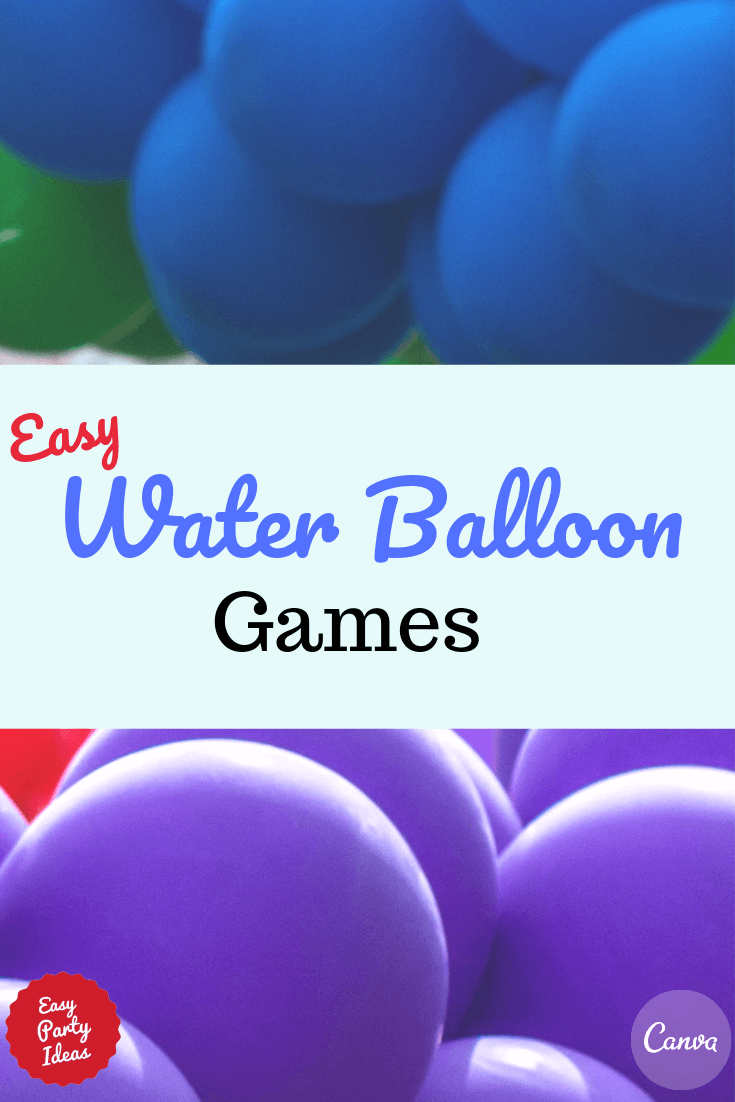 Leaking Balloon Toss - You'll need a filled water balloon that has a hole poked in it by a safety pin (make up a supply to play the game over and over…). This game is somewhat like Hot Potato. Players stand in a circle and toss the balloon around. Try to not be holding the balloon when it runs out of water!

Musical Water Balloon Toss – You’ll need a supply of water balloons. Have players play catch with the balloons. Once one breaks, don’t give the players anymore unless they sing a song for you (if a birthday party, have them sing happy birthday). Have some different songs, nursery rhymes, etc. in mind to request that they perform for you. Every time they sing a song, give them a balloon.

Sponge Tag – You’ll need a supply of wet sponges. Select one player to be “It”. On “Go”, “It” tries to tag other players by throwing a wet sponge at them.

Water Balloon Sheet Catch – You’ll need a supply of filled water balloons and a sheet for each team. Each team picks one person to throw the balloons. The rest of the team goes a distance away with the sheet. The team that catches the most water balloons wins.

Water Balloon Game Toss - You’ll need a supply of filled water balloons. Form two lines of paired players, facing each other. Have each pair toss a water balloon back and forth, taking a step backwards after every toss.

Water Catch – You’ll need a sprinkler and a cup for each player. When the sprinkler passes their way, each player tries to be the first to completely fill their cup (by the water landing in their cup). Make a rule about how far away they must be. An oscillating sprinkler works best!

Who Am I Water Fight - This fun water fight game was submitted by one of our visitors!

Water Balloon Games from other Visitors

Water Balloon Baseball
By: Anonymous
You will need a supply of water ballons. First person holds the bat and the second person pitches it to them and they try to hit the balloon and pop it and try to get the pitcher wet.

Duck Duck Splat
By: Natasha,
From: Largo, Florida
You`ll need a supply of water balloons. This game is just like Duck, duck, goose, but when someone is picked "goose" the player has a water balloon dropped on his/her head.

Water Balloon Hunger Games
By: Shinobi
You'll need to have at least 14 people. Scatter water balloons around a field, or house, and put water guns in the middle. Make sure everyone is equally distanced from the "cornucopia" of weapons, then yell "start!". Everyone has three lives, and has to play honestly and fair to make the game fair.  When someone loses their life, they drip their weapon, and head back to the cornucopia. Each player can only hold on to one water gun, and to switch guns with a killed tribute, they must leave their own gun on the ground. Leave buckets filled with water (paint buckets perhaps,) around the field so players can reload. The winner will be crowned victor of the hunger games, and should get some sort of prize.

Water Balloon Roulette
By: Kelsey, Monroe, LA
2 or more people stand in a circle one person stands in the middle and throws up a water balloon and the players stand still and who ever gets it loses.

Water Balloon Stomp
By: Anonymous
Have different colored water balloons for each person, with 3 to 5 ballons per person. Place the balloons on the ground. Hand each person a squirt gun and then have them race to see who can pop all their balloons first by stomping on them. The squirt guns are for disrupting the other players to distract them from popping their balloons first. You could also have a piece of cardboard propped up about 20 feet out from the last platform that they have to squirt to announce their victory.

Angry Birds
By: Courtney and Taylor, Axtell, KS, USA
Two two-by-fours with a bungee in it to make a sling shot. Then you set up angry pigs, like in the game angry birds, and then you slingshot water balloons to knock them down. Just like in angry birds.

Hidden Water Balloons
By: Anonymous
Hide a good amount of water balloons in your backyard.when you say go every one starts looking for the water balloons and having a fight.

Water Balloon Spoon Race
By: Janessa
How to Play: Have a spoon in all the players mouths, and place the water balloons on each spoon. Ready set go and start the race. To win you have to make it the farthest with a balloon on the spoon. Have fun.

Here are more ways to have fun with water!

Pool Games to go with your water balloon games fun