Fast Charades is perfect for those who love classic adult party game ideas but want to add a little twist!.

This version moves along faster, and can sometimes be easier because you'll be acting out words instead of phrases and titles (especially easier if you are unfamiliar with a title).

Well, I said it can be easier. It just depends! When you are just doing a word, instead of a phrase, sometimes these can be hard to work out. How would you act out the word "birthdays"?

This game is played with a timer, so no matter what, you are working to get as many points as possible before the bell rings! 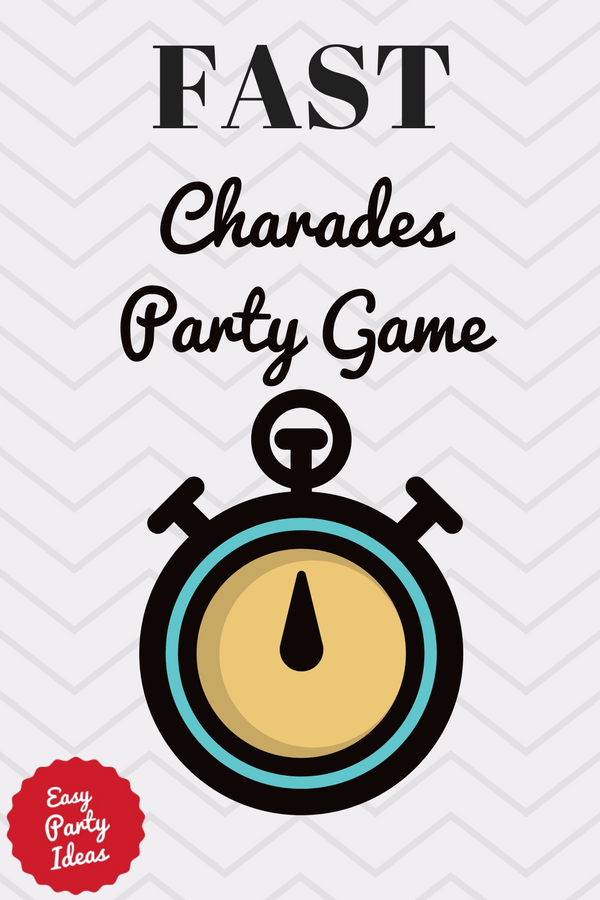 What you'll need to play this game

How to Play Fast Charades

Have each person write down words (either a noun or verb) on a piece of paper.

Divide your guests into two teams. If possible, I love to divide it guys vs. the girls. It seems to really bring out the competitiveness between the two sides, but however you want to divide the room will work.

One person from the first team will draw a piece of paper and act out what it says so that his or her team will guess what it is.

When the first team guesses the correct answer, play switches and it will be the next team's turn.

Keep track of how much time each team spends on their turn.

The team with the lowest total amount of time used wins.

The game is over after each person has had a turn to draw a slip of paper and act out their item. If teams are uneven, make sure that the same number of people for the first team have a turn as the number of people on the second team.

An Alternative Way to Play

Instead of acting out the word, have them draw a description of the word until someone guesses.

If you are playing this as a birthday party game, you can use words associated with the birthday person. These may (or may not) be easy to guess, depending on how well everyone knows them!

Sometimes it is nice to just purchase something, open the box, and play! There are lots of different options for Charades that are available to purchase, such as these Charades Games

available at Amazon.com. I honestly haven't played these, but one thing that is great about Amazon is the community there that rates and supports each product offered so you have a good idea of what you are buying before you order it. If you've played any of these games, I'd love to hear from you to hear your thoughts!

Another fun party game that is fast and very competitive because it is on a timer is a game called the Guessing Game.

Not looking for Fast Charades? Here is the old fashioned version!

Shop for Great Party Board Games (check out Catch Phrase, you'll find it similar to this one)