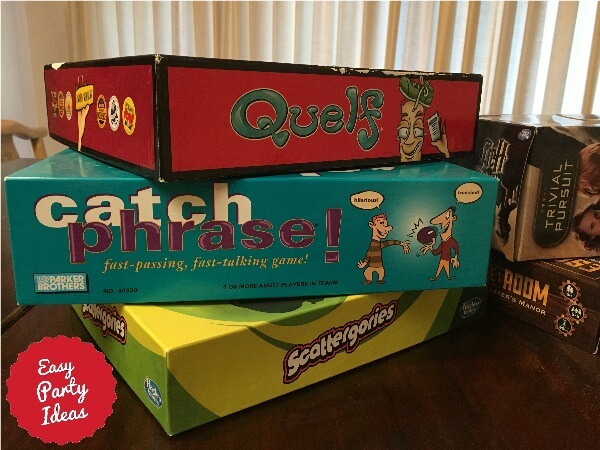 If you are looking for easy and fun great party games that are easy to play and that can be purchased and played right out of a box, then this page is for you!!

If you don't already own these games, you may be able to borrow them from a friend. Or perhaps you'll want to invest in your own to have on hand for future parties!

When selecting which game you will play, keep in mind:

One of my favorite great party games. The bigger your crowd, the better! I've played it in groups of 30 before. You need to divide into two easily recognizable teams, so great to play guys against the girls! There are lots of different editions available too! If there is only one game to own, for me, this would be it!

This is played in teams and can be played by both large and small groups. Lots of fun!

A classic party game which is great to play in teams so it can lend itself to a larger group. No drawing expertise required!

Apples to Apples Party Box The Game of Crazy Combinations

This game comes in several editions, and works great for 4 - 10 players. A classic after-dinner game!

Great to play for the competitive and create people in your group. Because you play in teams, this is a good game for any size group. Also, playing in teams will help people get to know each other better!

This game is too funny. I have a friend who now refuses to play because he always seems to be the person who ends up having to do something ridiculous for an extended period of time, like panting like a dog most of the game. The rest of us want to play because we know that he will be the person doing those silly things! Works great for small groups.

A classic! Even at a large party it can be played if you have people doing different things at different times. Many a party I've been to where this game is sitting out for people to play, and sometimes a few will play for a while, someone will get up and a new player will take their seat. You can play in groups or individually. Lots of editions are out there too based on certain interests!

Whats a DAME to do?!

Honestly, I haven't played this game, but it has been recommended to me by so many people, I wanted to include it on this list of great party games. From reports I've heard, it is good to play for a girls night, and it is a relatively "clean" game - safe to play with small groups of mixed ages, church groups, etc.

style game and supersize it! Makes a great game to set up and let everyone play as they wish. Very popular for everyone to gather around, and makes a great ice-breaker game too!