Whether you spell it Bunco or Bunko – this dice game is fun!!

This is the perfect party game. It requires no skill whatsoever, but is really fun.

You can play the game with a regular group or as a one time event. Today it is often played as a girl’s night out. In the past, however, men and women both played, and sometimes it is played by charities as a fundraising event.

There are several variations of rules …

As a matter of fact, you probably won’t find two groups that play it exactly the same way.

The instructions look complicated…but once you start playing you’ll see just how easy it really is!

This page of instructions will give you a great example of how to play. Here you'll find how we play it for parties and for our regular monthly neighborhood game...we even have a free score sheet for you to use! 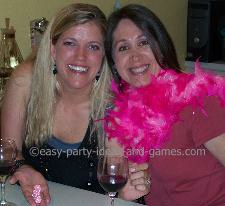 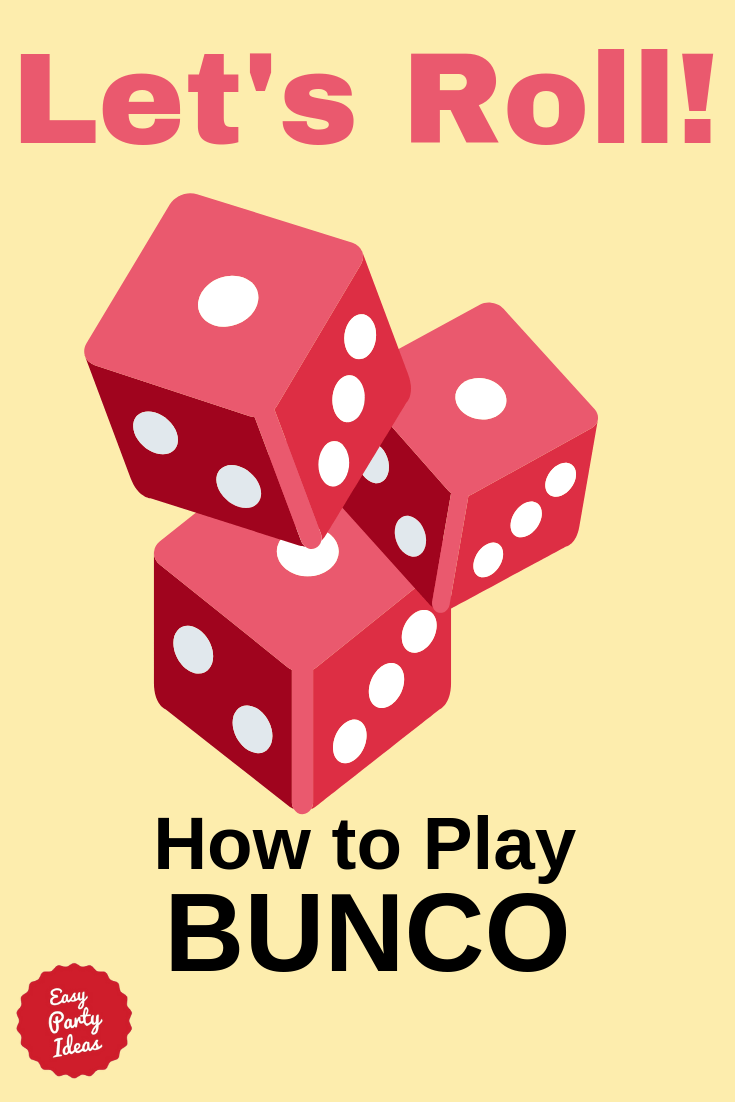 When playing this dice game, divide your guests into groups of four. Don’t have the right number of guests? We’ll get to that in a minute (see "Playing with a Ghost" below.) For the moment, assume that you have 12 people, which is the ideal.

If you have 12 people, you’ll need three playing areas where guests can sit and roll dice on a hard surface. A playing area can be a table, card table, or sitting on the floor around a coffee table or tray.

Call one table (or playing area) the “high” table, one the “middle” table and one the “low” table. Each playing area should have three dice. The bell should be at the head table.

Have everyone take their seats. It doesn't really matter who sits where. Some groups like to draw a number to see who will sit where. Two players sitting across from each other form a “team”. There are two teams per table. Teammates record the points scored by both themselves and their teammate.

Each player should have a score sheet and pencil.

Playing the Game - Round One

Someone at the head table rings the bell to start the game.

Each table plays as follows:

One person will roll the dice. The goal is to roll 1’s. If any of the dice come up as a “1”, then keep rolling. The two teammates will record any 1’s rolled as points on their score sheet.

When no 1’s are rolled, give the dice to the next player.

Play continues until a team at the head table earns 21 points. At this point, they yell “bunco” and ring the bell to end the round.

If a person rolls three 1’s in one roll, they yell “bunco!” and get to wear the boa (they wear the boa until the someone else gets a three-of-a-kind of the number they are trying to roll - there is a prize for whoever gets the boa the most, as well as who has it at the end of the night). The two teammates will addb 21 points for the round to their score sheet!

If a person rolls three of a kind of a number other than 1, it is a “mini-bunco”, which gives 5 points to the team. This “mini” doesn’t give you the boa though. You only get to wear that if you have 3 of a kind of the number you are trying to roll.

Preparation for Round Two:

After the first round, the two winners of the head table will stay at that table.

The two winners from the middle table will move to the head table.

The two winners from the low table will move to the middle table.

Losing teams will stay at their tables, except for the losing team of the head table. They’ll move to the low table.

Whether you stay at your table or move, most players will be in a new seat. You must switch partners after a win or loss. You may not be on the same team with someone two rounds in a row, however, later in the game you can play with a person to make a team again. So, teams remaining at a table should shuffle around so that they are not on the same team for the next round.

Round Two… and beyond:

Same as round one, except try to roll 2’s. Continue each round by trying to roll 3’s, 4’s, etc. After you have done six rounds, which are as high as the dice will go, you have completed one game. Wasn’t that fun? How many games you play depends on how much time you have.

For our monthly game, we usually play about 2 games. Another group I am in does three complete games each time we get together!

Each player should have kept track of how many games they have won, lost, and how many times they have rolled 21 (Bunco! - 3 of a kind of whatever number you are trying to roll). Time to recognize the winners! If you are playing as a one-time party, such as a birthday party or other event, the hostess may want to provide small gifts as prizes without asking everyone to chip-in.If you are playing a neighborhood game, you could have each person put money in a pot ($5) and use that for prizes. Or the hostess could buy small prizes ahead of time. Of course, prizes aren’t necessary. As long as you proclaim the winners and have a fun time!

We recognize the following winners:

Playing with a ghost:

If you are only missing one player you can choose to play with a ghost. Get a big stuffed animal to be the “ghost” player and set it in one of the chairs. The ghost’s teammate will roll for herself and for the ghost. Whoever is teamed with the ghost for the next rounds will do the same.

It is a bit tricky playing with a ghost, and it isn’t recommended to play with more than one ghost.

So this page was devoted to how our group plays.

For more official rules, as well as common variations to the rules, visit our page Bunco Rules.